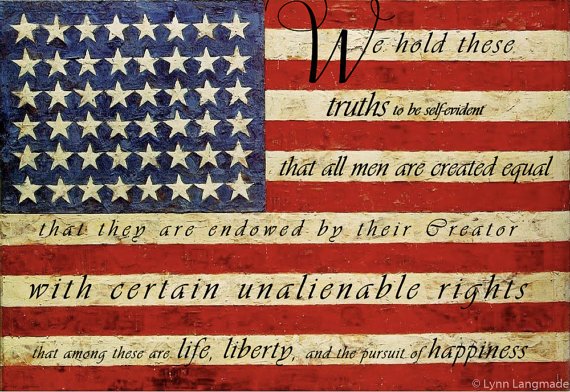 Today on our Independence Day, I was thinking about this retort of #AllLivesMatter, why it is offensive, and why we have to remind people that certain groups actually DO matter, when literally speaking, “ALL” should include everyone.

I watched Hamilton last night (I cannot recommend it enough), and it got me thinking about our history. I love words and language, so I am always thinking about how words matter. Language is so incredible, and the power that it has cannot be overstated.

In English, some words are vague and leave room for interpretation, while other words are more concrete. #SCOTUS must always decide what was meant when certain words were written and how to interpret the words of the law.

If, however, they said that they had been to “ALL of the U.S. States,” and it was TODAY, you would take that to mean they have been to 50 States. Maybe not D.C. or the territories, but “ALL” means “All states”, in this case. Obvious, no?

“All” means 100% without exception. There is no interpretation. Did you read the book? “Yes, I read ALL of it.” We know what that means.

The Declaration of Independence was written by people (men) who were trying to free themselves from a monarchy. In England, there was no doubt that all men were not created equal. It was said that the royal lineage was God-given, and that they were simply born better. This was known as the Divine Right of Kings. The nobility were down from this, but still better than the common people. King George III believed he was superior by decree of GOD. The Founding Fathers were trying to break away from that, and the language they used was intentional. They reference God, in part because they were Christian, but I would imagine, in part, because this was a direct argument to the divine right of kings system of the British Monarchy.

“We hold these truths to be self-evident, that all men are created equal, that they are endowed by their Creator with certain unalienable Rights, that among these are Life, Liberty and the pursuit of Happiness”
-The U.S. Declaration of Independence

Now, they clearly state “men,” and women were definitely left out of the equation, but an argument could be made that humankind was usually referred to as “mankind,” so perhaps they were not intentionally excluding women. I would love to give them the benefit of the doubt on this one.

However, what is not debatable is that they said “ALL MEN.”

And that, my friends is where the trouble began because they did not mean ALL MEN. There were definitely men among the Founders who wanted to free the slaves. Slavery was part of the holdover from the British colonial reign and they wanted a fresh start, but the Southerners fought hard on this point and won out. This is touched on in Hamilton. The new nation began with slavery well in place. Slaves were very much not considered equal, or, as repugnant a notion as it is, even men (humans). Because of the large number of slaves, the Southern states would have a voting advantage, clearly not because slaves could vote, but because if slaves were counted as a part of the population, and the number of delegates were based on population, the non-slave states felt this would give the slave-owning states more power. Hence, the Three-Fifth’s Compromise, where each slave counted as only 3/5 of a person. Anyone who learned fractions in school knows that 3/5 is part of a whole not at all equal to a whole.

This started us down a very bad road of inequality.

Another reference to “all” is in the Pledge of Allegiance,” which school children are compelled to say each morning; a very questionable practice.

“…one nation, under God with liberty and justice for all.“

There’s that “all” word again, and this time it is not a qualifier of the noun as in “all men,” but it is actually being used as the noun. It is one of those phrases that is open for interpretation. Does it imply all creatures? All grapefruit? All adults? All men? I think we an rule out the first two, but one could make a very strong argument that it means “all Americans”, and that would include all races, religions, genders, ages, ethnicities, etc.

When the words “All men are created equal” were written they definitely were not referring to Black men, and they were likely not referring to women. The Founders didn’t even consider the notion of gay or trans men or women. The phrase was only referring to Christian men, and frankly, the Americans had not really let go of class, so they considered educated men and land-owning men superior to those lacking.

Unfortunately, the Founding Fathers tarnished the word “all.” For all of their eloquence and their articulate words, they failed to use this one properly. They chose to include and interpret a word in the Declaration of Independence that is not actually open to interpretation, and then the Pledge, which was written over a century later, perpetuated this false use.

They should have done one of two things.

And now we have people saying “All lives matter.”

Yes, all lives do matter, and literally NO ONE saying “Black Lives Matter” doubts that or is contesting that, but we have a very fraught history with the word “ALL” in this country. The Founding Fathers used “ALL” to mean “some” i.e. “white,” so when white people today say, “All lives matter,” it seems as though they are using it the same way Thomas Jefferson (a Southerner and advocate of slavery) meant it when he wrote the Declaration of Independence, which is to say, “some white men are created equal and everyone else is not.” Because let’s remember their are also white people in this country who other white people leave out: Jewish and any religion other than Christian, LGBTQ, etc. So “SOME WHITE LIVES MATTER,” would actually be a more accurate slogan for them. “ALL” is grossly inaccurate, once again.

Hence, there is an unfortunate need to remind people that literally ALL lives matter and that means “Black Lives Matter, ” which is a revelation to some and to others, sadly, a false statement. Same goes for “Trans Lives Matter” and any other subjugated groups’ lives. While women are not targeted usually as a threat and attacked and killed in a way that makes the phrase “Women’s Lives Matter” necessary, women have also had to fight against the false notion of “liberty and justice for ALL” and “Believe Women” came about. When stories are “he said, she said,” ALL white men are believed over ALL women. Race also complicates this further, of course.

The Founding Fathers were pretty brilliant, but they were human and they were flawed and they did not all agree all of the time. The ones who were against slavery and wanted to emancipate the slaves upon independence should have fought harder, but they didn’t. They should have freed the slaves and made them equal citizens, and they should have meant “ALL” when they said it. The history of equality for some and not all continued with the 13th Amendment and the notion “Separate but Equal” to name just two institutional examples. Women didn’t get to vote till the 19th Amendment, and are still generally not equal to their male counterparts of the same race in terms of salary, opportunity, etc.

Here we are in a country based on the true statement that “All (people) are created equal,” that fails to actually operate on that basis. Until ALL Americans are seen as equal, and until justice is actually blind, we need to continue reminding people that certain individuals’ and groups’ lives matter because otherwise, it seems that they do not.

So yes, when you say “All Lives Matter,” it is tone-deaf and history-deaf and racist and does not move us any closer to a time when we can truly say that: