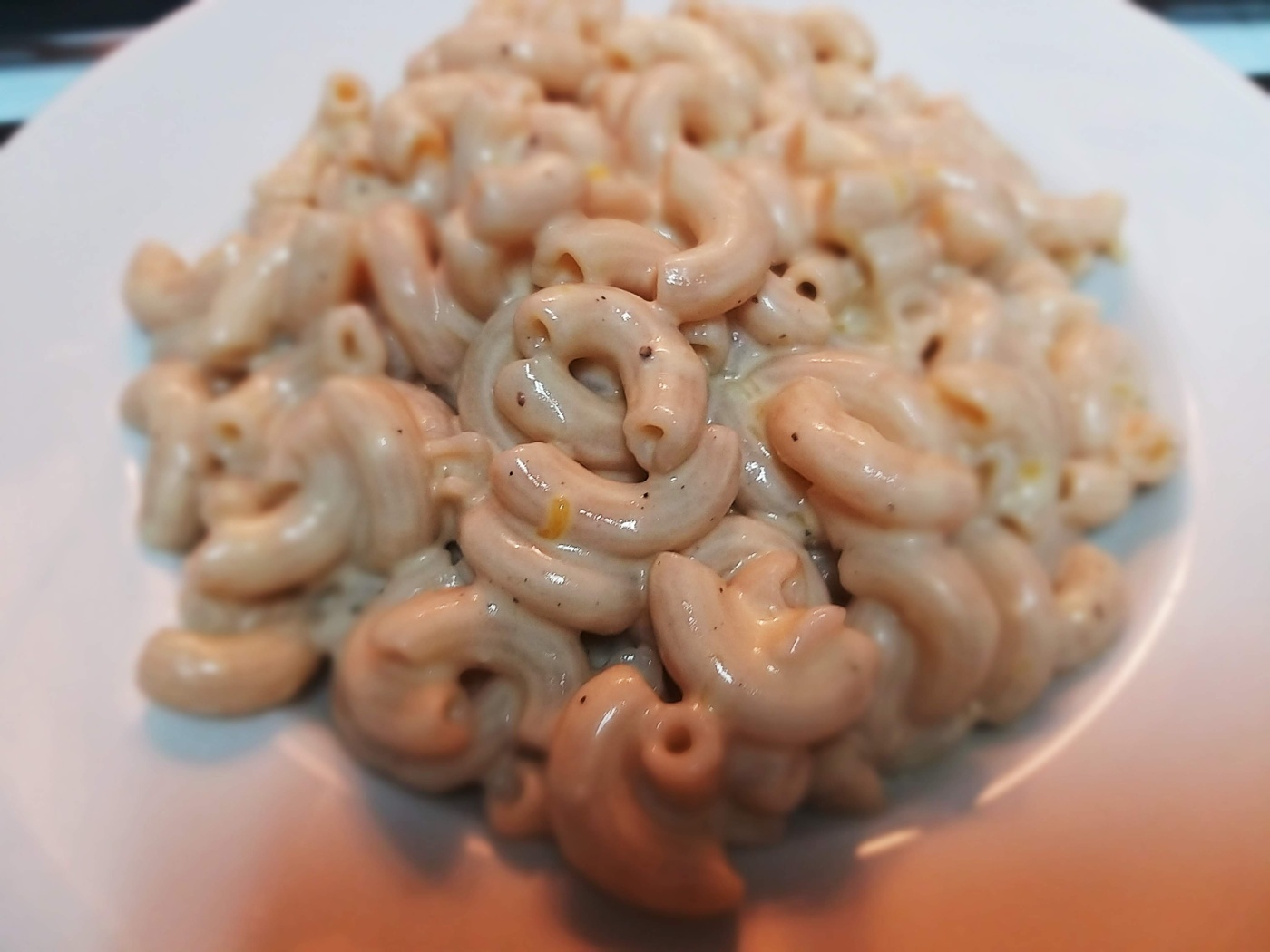 There is very little more basic, but more delicious than homemade macaroni and cheese. You know you got some boxes of that powdered shit in your pantry, but this is soooooo much better!

As usual, I will give you the basic recipe, and then I’ll give you some ideas if you feelin’ fancy and want to impress your boo.

The secret ingredient in this one, aside from the actual real cheese is, wait for it…nutmeg. You like, “Shut the front door, bitch, nutmeg?” It’s best if you have the real deal (photo of nut and grater below), but ground is fine too. You know you got some buried in the back of the cupboard from when you were gonna make eggnog till ya realized it was raw egg. Nasty.

First geniuses, cook the macaroni, as they say, “According to package directions.” Any kind is fine.

I think I have mentioned that I am writing a lot during the March 2020 social isolation, COVID quarantine thing, so I have been dutifully staying da fuck out da grocery stores. This is the inspiration for the alter ego “basic bitch,” cause fancy, vegetarian, hippie recipe chick is running out of produce. I happened to have some random-ass gluten-free brown rice noodles. I don’t recommend them, but I figured, they would taste ok smothered in creamy, cheesy sauce! So, that’s what I used. Spirals are da bomb for mac n cheese, bow ties, ziti, really anything. You can also mix them up, but you gotta cook each type on its own because otherwise, you gonna end up with some that are mushy as hell and some that are still crunchy. Trust.

Be sure to salt your water. Don’t be a barbarian. 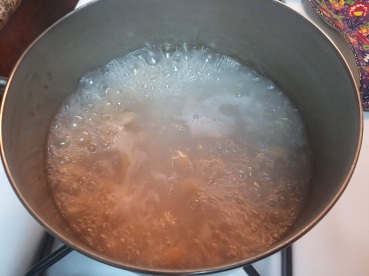 Then you gonna drain that in a colander, that bowl with holes, and let the noodles hang out while you make the special sauce. These rice noodles are supes weird, and have like a starchy coating, so I rinsed them in cold water to keep them from sticking to each other like super glue.

You probably had the heat on high to boil the pasta, which is fine, but I promise you, you do not want to boil the milk, so turn that heat down to medium/medium-low.

You can use the same damn pan, chill. Just make sure there are no sorry-ass noodles stuck to it, and kick those stragglers out.

Time to make the sauce. You need your butter & flour, milk & cheese, salt & pepper, and nutmeg.

You can use real milk, soy milk or whatever. I used some sad blend of what was left in three cartons. I had evaporated milk that my bougie sister had bought while she was here. Da fuck is ‘evaporated milk?!?!!’ If it was evaporated, would it not be powder? Anyway, it was like 1/2 cup. I had the rest of some plain, unsweetened almond milk. I do NOT recommend almond milk. It has a flavor that just comes screaming through. And I had the rest of some sweetened vanilla soy. Shut-up, I know that sweetened vanilla is a dumbass thing to put in a savory dish, but as I said, times are rough!! AND, my point is, you can’t fuck this up even with fucked up noodles and the junk drawer of milk!

I used that same shredded Mexican blend I had for the omelette and Asiago, which I only used a little of because that shit smells like feet. I used a cup total, but you can kind of never have too much. If you run out, or you’re a bit sensitive and can’t go overboard, cut it back. As with the omelette, any cheese that melts is fine. You can mix it up: cheddar, Colby, Monterrey Jack, Fontina, Havarti, Gouda, Muenster, Provolone. Again, mozzarella isn’ the best choice, but it’s fine, and if you have a Italian blend, go for it. If it’s not already shredded, grate it while the macaroni is boiling.

You also need salt, pepper and that nutmeg I was talking about, but if you don’t have it, it’s okay. Try it next time! 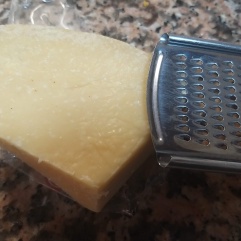 To make the sauce you gotta make this thing the fancy French assholes call a roux. We don’t have a word for it in American because we just call it melted butter and flour because we basic. A roux sounds hard, but we can totes melt butter! 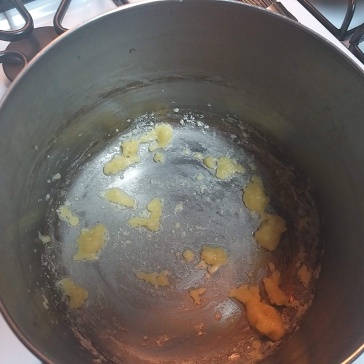 Next comes the milk. It’s best to add a little (top left photo below), whisk it (you REALLY gonna wanna use a whisk for this otherwise you gonna end up with some lumpy-ass sauce), and then add some more till you have used the full cup. If you still see little bits of roux, just keep whisking and they will blend as the milk heats.

This is the moment where it is possible to fuck it up. Keep the heat no more than medium and do not let the milk boil! If it boils, it may burn and stick and it may even separate. Be patient. It will be syrupy thick at this point, but you don’t want it to get too thick. Add some salt (top right) and pepper and nutmeg (bottom left). Just a dash of all. You can always add more later. Once it’s hot and cute little bubbles have started to form at the edges (bottom right), turn off the heat. 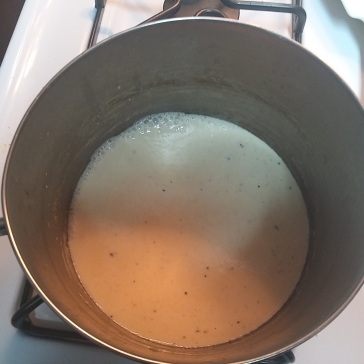 Now dump all that grated cheese in and stir with the whisk it till it’s melted. Next, dump the pasta in and stir it with a spoon, not the whisk, till it is all coated.

It should be a little thinner than you think it ought to be because the starch on the pasta will thicken it. If it is really still too thin, I would just add some more cheese and let it sit for like 5 minutes. If you don’t have enough sauce-to-pasta ratio, add a little more milk and/or cheese and stir that in. Taste it. More salt? More pepper? Did you get that tiny hint of sumpin-sumpin that is the nutmeg? Right!?!

There are a lot of recipes for baked macaroni and cheese. I grew up in the South, I know. They are delicious, but I find that they can get really dry, the noodles can get mushy and it takes longer. Why not just be done, now?

Yes, I agree. We done, bitches. Put that in a bowl and dinner is served!

Optional ways to fancy this up!