This blog is going to seem self-indulgent, and that I am looking for praise and accolades. I am not. I am not trying to draw attention to what I did except to say that it is amazing how the simplest, tiniest things can have such a huge impact. I think we can forget how even when we think we have nothing to give, we have so much.

Actually, before I tell you my short story, I want to share this graph which demonstrates that people who make over $5 million give less of the money away than those that make under $50,000. People with less, give more. Interesting, isn’t it? 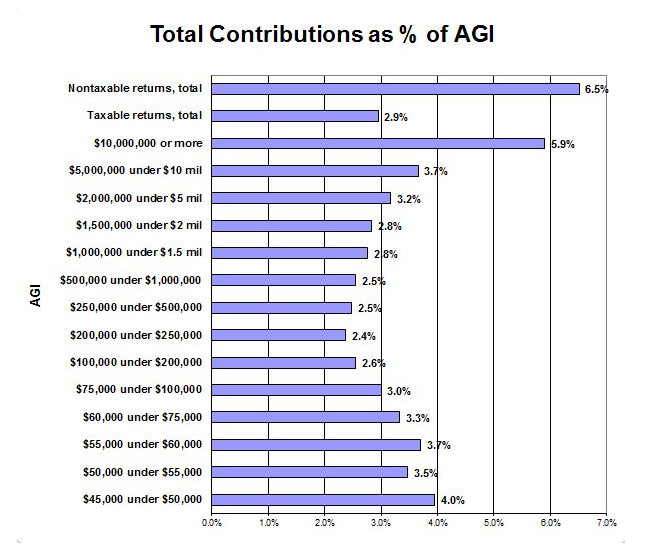 Here is my story:

As you will know if you read my last blog, I am sort of between jobs, so I am only working part time, and have excess time on my hands. I decided to volunteer at a local homeless shelter. I offered to teach yoga and meditation or computer skills or resume development or whatever was needed. I ended up going three weeks in a row, one night a week and hanging out in the computer lab offering assistance on an ad hoc basis. Some took me up on it, but what proved to be more valuable was simply talking with a couple of the residents. Their stories are fascinating, and not what you might assume.

One of them made a particularly big impact on me. I will not share his name or the shelter, and while this is a real person, I am not going to attempt to describe him in a way that anyone would recognize him. I am not trying to violate his privacy, but by sharing his story I hope to inspire you and remind you how tenuous a comfortable life is.

One of the evenings I was there I was chatting with this particular young man. I have a pretty good read on people, and he had this innate kindness to him, but it was being overshadowed by paralyzing self-doubt and terrible self-loathing. While attending a very prestigious and highly competitive college, he started drinking too much. We all know probably 90% of college kids drink too much, but most outgrow it and eventually stop. Some have alcohol addiction problems. He fell into the latter group, and failed out in his second year of school. From there, he started working as a bartender, which we can agree is not the ideal environment for someone with a drinking problem.

After belatedly realizing that it was not a great career move, destroying a relationship and losing his license due to DUI’s, he left the scene after a decade of self-destructive behavior.  Because he’d burned the bridge with his middle-class family, he couldn’t go home. Because at almost 30, his peers were largely making money and being successful, he was ashamed to turn to them. So, he wound up penniless with no job, no driver’s license, no friends and no degree at the homeless shelter.That’s when I met him.

The night we met, we ended up talking for over an hour. He had recently been hospitalized due to alcohol withdrawal, but he was sober when we spoke. He told me about his job at a large retailer stocking shelves at night and how much he hated it, but more that he felt badly because he felt he was taking the job from someone who wanted it. He told me about his desire to live overseas and to travel. He told me that although he knew it sounded cheesy, he really wanted to help people. He told me he was a fuck-up and that he had wasted the past 10 years of his life. He said he had wanted to be a journalist once upon a time, but now he didn’t know what he could do. He was incredibly negative and down on himself. I didn’t pity him or even feel sorry for him. I felt compassion for him and I felt sad that he hated himself so much, and valued his own life so little.Honestly, I wanted to shake him.

I told him I would be back in a week, and that we would strategize a plan for him. We would think about what options were available and we would work on his resume.

As promised, I came back. I sent his case worker to go find him for me because I had a great idea that I wanted to share with him. I had this vision of him being excited about the news I had and telling me he hadn’t thought about it before and that he was so excited to look into it!

Be mindful of unrealistic expectations.

He came out and found me; I could smell the alcohol on his breath. His jaw was bruised where he had been punched by another resident. He was angry, bitter and drunk. We talked even longer this time. He wavered between woeful self-pity and resentful hatred directed towards me at times, but he wasn’t remotely violent or aggressive. He asked why I was “kissing his ass” and “being nice to” him. He took my idea, but dismissed it. And frankly, it wouldn’t serve him if he was drunk anyway.

After he talked for awhile, he paused and I asked if he was looking for advice. He said that he was. I told him to “Get fucking sober.” He was silent. Then he laughed and I did too. “Were you looking for some sage words of wisdom?” I asked. “Yeah, actually I was,” he replied. “Well,” I said, “I wish I had them, but before you can do anything else, you need to tackle your demons and you need to get clean.” Having had a number of friends quit drinking and/or smoking, I am familiar with how hard it is. He was going to end up dead, however, and soon. I felt like tough love was the way to go.

We talked for awhile longer. I told him that I wouldn’t be back because I was moving. He shook my hand, looked me in the eye and said goodbye. I wanted to cry. I knew that he was hurting and felt abandoned, and maybe he had a right to feel that way. What right did I have to swoop in, and tell him what to do only to leave?

We had talked about yoga and meditation, and he had said he enjoyed meditation, which I had suggested he should try again. So, before I left town, I bought him some meditation stones. I chose ones whose meaning and strength were very specifically intended to help with addiction, with self-esteem, with decision-making and with other things I thought would support him. I wrote him a card telling him that I believed he was a good person with a kind heart and a powerful brain. I told him that he had so much to offer the world, and that at only 29, he had plenty of time to something positive with his life. I told him what the stones were, including their significance and the powers they were supposed to have. I also left him my phone number, and told him he could call me anytime he wanted to talk to a friend.

He wasn’t there, unfortunately, when I stopped by the shelter, but I left the card and the stones with the case worker on duty.

Over a week passed before my phone rang. It was him. He said, “Well, I fucked up again.” “What did you do?” I asked. He told me he had been hospitalized again for alcohol poisoning. He almost died–again. He told me the hospital was going to get sick of him, and should just turn him away. And then he told me that he had decided to take the state up on the offer of a rehabilitation center. He was going to go for at least 30 days, maybe more, to a resident rehab center. He told me he felt badly that tax payers had to pay for his “dumbass to get sober.” I told him taxpayers like me know what our tax dollars go to, and many of us are more than happy to pay for such services. He told me that he didn’t want to end up dead.

Then he told me how much the stones meant to him. He said he was holding them as we spoke, and that he had been using them to try to meditate again. He told me how much my words meant, and that he didn’t know why I was being kind to him, but he was truly grateful for it. He said they had given him the card when he got out of the hospital and he had read it and reread it. He told me he wanted to get better and he thanked me for believing in him.

I asked him to call me to let me know when he was heading into the program. I also told him he could call me between now and then if he needed support getting by until that time came. I worry that in the weeks that he waits for this to happen, he will end up back in the hospital or worse. I worry that he will be ashamed to call me.

And that’s where we are. I have no idea when he goes into the program or if it will get him on track. I have no idea if he will stay sober. I don’t pretend to think that I was much of a factor in this decision, but I know from his words that my words helped him. I know that my showing him that he was valued impacted him. I know that taking a few moments to tell another human that they are worthwhile cost me nothing, and gave him a tiny lift, which was maybe the right lift at the right moment.

I am definitely guilty of sometimes thinking if I can’t give thousands of dollars, why bother giving $5? If I don’t eat 100% organic, why bother eating organic eggs? If I can’t commit to volunteering for a year, why volunteer for an hour? This reminded me that every act of kindness, every dollar spent, every hour given, every smile passed, every kind word uttered has a positive impact.

I want to reiterate that I am not sharing this so you will comment what a wonderful person I am. I’m not a wonderful person because of this, and I am not looking for platitudes. I wanted to remind us that other people down on their luck are people too and we have no idea when it may be us who needs the hand up. Be careful of judging those who you think have made mistakes and need to “sleep in the bed they’ve made.” I wanted to remind us all that even the tiniest acts can have huge impacts. We are all, at the end of the day, just trying to be happy humans, and sometimes it only takes a little boost to get someone back on their own path to happiness. Plus, by giving them a boost, you may just boost yourself too!